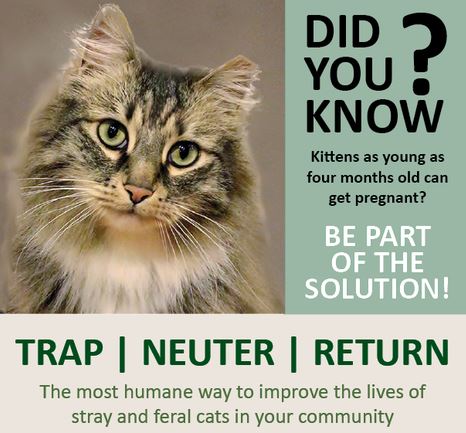 St. George Animal Shelter is pleased to participate in Trap-neuter-return (TNR.) TNR is a management technique in which community cats are humanely trapped, evaluated, spayed or neutered by a licensed veterinarian, ear-tipped to show they’ve been sterilized, vaccinated against rabies and distemper,* and then returned to their original habitat. Targeted TNR (i.e., maximizing the number of cats sterilized at the colony or neighborhood level) offers several benefits over the inefficient approaches that have been used for generations, such as complaint-driven impoundment, which is often followed by lethal injection. These benefits include:

It’s important to recognize that each of the examples cited below is a success in its own way. The studies in Alachua County, Florida, and San Jose, California, focus on decreased intake and shelter deaths, rather than reduced community cat populations (a much more difficult metric to quantify). From an animal welfare perspective, such examples are compelling, but might mean little to stakeholders whose most important (perhaps only) measure of success is population reduction.

*Not all TNR programs include a vaccination component. Rabies in cats is a rare event, so this step is optional in some programs. Vaccination is considered best practice, however.